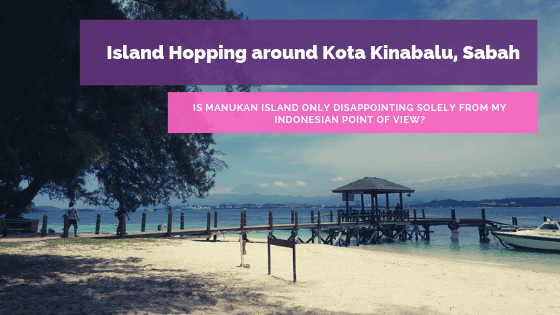 As much as I wanted to go to explore Mount Kinabalu, I had to skip it as it turned out to be so expensive. I only spared 3 days in Kota Kinabalu, and I tried to make the most out of it to explore the city itself. One of the dos in the city, through some research prior to my departure, is island hopping to some islands that I could do from Kota Kinabalu.

At first, I was considering to book a tour for the activity. Lucky for me, I met a fellow traveler Yukyeong in Brunei. She told me that she was in Kota Kinabalu a few months before she came to Brunei. And she suggested me to just book the tour go-show from Jesselton Point.

During her trip, she booked the tour online and she found out that the price was much cheaper around Jesselton Point. She also told me that one of the popular islands to go from Kota Kinabalu is Manukan Island, the island that she stopped by in her last travel too.