I know it’s Thursday already and I was supposed to publish something for the $10 series yesterday, but I don’t do it this week on purpose.

First of all, I had to do all the maintenance work for my blog in the past few days. And I had some trouble with the collaborator whose post was supposed to publish this week.

But don’t worry about it, because sometimes you actually gain something when you lose the other thing. And this time, I’ll continue to write something that was intended to write a long time ago.

Now that I mentioned about my staycation at Savoy Homann Hotel, I’m still yet to write about the rest of my staycation. And I’m going to write the details now as I want to share my experience to visit Museum of the Asian-African Conference that is located just across the hotel. 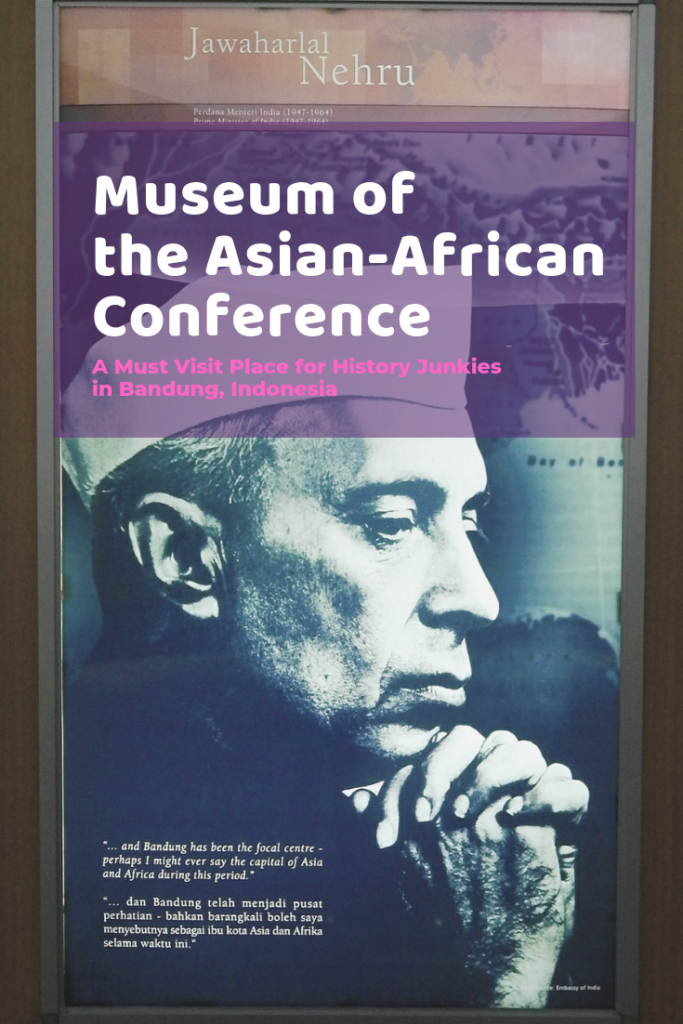 Let me help you recall the fun fact about “Bandung Walk” during the Asian-African Conference in 1955. It marked the beginning of Bandung Conference when all the country leaders involved started their journey from Savoy Homann Hotel to the venue of the conference.

The venue of the conference is the building that we’re going to talk about this time: Gedung Merdeka. Meaning the building of independence, it’s currently known as Museum of the Asian-African Conference.

So, what’s so special about it or the conference in general? I’ll tell the rest of it in this post!

Also known as Bandung Conference, it was held in my hometown Bandung, Indonesia from 18 to 24 April 1955.

The idea of this conference was first suggested by the then-Prime Minister of Indonesia, Ali Sastroamidjojo, during the Colombo conference in 1954.

Later in the same year, several representatives of the countries which eventually became the sponsors of this conference met in Bogor, Indonesia to formally decide the date and the venue of the conference.

With the rising number of newly independent countries in that era, the government of these countries had a series of goals in mind for the conference. Apart from promoting goodwill and cooperation among the new nations in the era, the conference also marked the first international conference involving the people of color.

The Result of the Asian-African Conference: 10 Principles of Bandung

In case you didn’t know, in the last Asian Games 2018 I volunteered to assist the representative of Sri Lanka. One of my tasks was to deal with the people from their embassy representative in Indonesia. The first time I met the ambassador and I told him I’m originally from Bandung, he was a little way too excited than I expected.

As I visited their embassy one day, I found out why. The result of the Bandung Conference was pinned with pride between the flag of Indonesia and Sri Lanka.

Ten points of the declaration on promotion of world peace and cooperation, known as the Bandung Principles, came up as the result of the Asian-African Conference in 1955.

The conference, as well as Bandung Principles as the result of it, eventually bore the third world countries in which it became the foundation of the Non-Aligned Movement during the Cold War era.

Museum of the Asian-African Conference in Bandung, Indonesia

Initially constructed for the Sociëteit Concordia, Gedung Merdeka used to be a dance hall as well as an entertainment center for the rich in Bandung during the Dutch colonial era. The building was chosen as the venue for the Asian-African Conference as it was the largest and grandest hall in Bandung at the time.

In early 1955, the building was renovated and renamed as Gedung Merdeka. The name that is known until the very day.

Free Entry to Learn More about the History

I’ve been to Gedung Merdeka a few times in my entire life, but not as a tourist. As a former International Relations student myself, I was there for a model of the United Nations in my university years ago. So, visiting it to get into a museum tour was totally a new thing for me!

CMIIW, but I think Monday has become the universal closing day for the museums by default. So it is for the museum of the Asian-African Conference. Plan ahead before visiting the museum, avoid Monday and any other public holidays!

The good thing is that it’s free, and you will be given the option to have a tour guide in both English and Indonesian. I didn’t get the guide, as I could always read all the descriptions in their exhibition. I also took the flyer about the introduction of the building and the Asian-African Conference in general.

The first section of the museum displays the exhibitions which include the statue of the event’s simulation as well as some pictures from the 1955 Conference. Basically, this section would introduce you to the event in general.

This section would help you understand what Bandung Conference was and why it was important for most countries in Asia and Africa in general.

By the end of section, you would eventually get to learn how this became a great momentum that would lead to the Non-Aligned Movement with its establishment in Belgrade 6 years later after the conference.

The Venue Where History Happened

After the first section, you will be led to the main venue at the building where the Asian-African Conference was held in 1955. It was where all the flags of the participating countries stand tall and proud.

Again, as a former International Relations student, the background has become the basic selfie spot for us. 😛

The main venue is also available to rent for some special occasions and events. That’s why we held our models of the United Nations here.

I remember the speakers we used for the event looking super old back in 2010 that I literally assumed that’s the speaker used by Soekarno for his welcoming speech at the conference.

Anyway, in the main hall of the building, you couldn’t find any description that supports the event in general. However, prior to reaching this hall, there was some corridor with the display of the recent of Indonesia’s foreign policy achievement.

Look, if there’s any flaw that I could find in Indonesia’s museums in general… The list would go long enough for me to rant on how boring most of our museums are. And frankly speaking, the museum of the Asian-African Conference was THAT boring!

I wish it could be more interactive, but maybe it’s worth trying to hire a private tour guide with you since it was a bit redundant to do the self-guided tour over here.

So, are you a history junky on your own? Have you been to the museum of the Asian-African Conference in Bandung, Indonesia? What do you know about the conference? Tell me what you know in the comment section, and cheerio! 😀