There was this article that has been shared for way too many times on the travelers’ group lately, and it is the one about Bali reporting begpackers to their embassies.

Look, I know I’m some kind of a failed Indonesian as I’ve never been to Bali before. However, I’ve seen this begpacker phenomenon a few times in Bangkok and Hong Kong. I don’t know though, there’s probably somewhere else that I’ve been where there were also begpackers. But at the time, I wasn’t familiar with what begpacker is.

However, I remember I was curious about why so many white street musicians around Tsim Sha Tsui when I was about to see Tsim Sha Tsui Promenade. It was only a few minutes when I saw some hippies spreading a floor mat and taking out some stuff from their traveling printout pics to even their friendship bracelet whatever.

I was amused and annoyed at the same time. And let me speak for myself, as a traveler holding a weak passport like the Indonesian one. Frankly speaking, if I were to do the same thing as they did in their country, I would be deported in no time.

But life isn’t always fair, so the only thing I could do about it is to spread the awareness on why you should think twice before deciding to begpack around Asia. This especially applies in the less developed countries like those in Southeast Asia region. 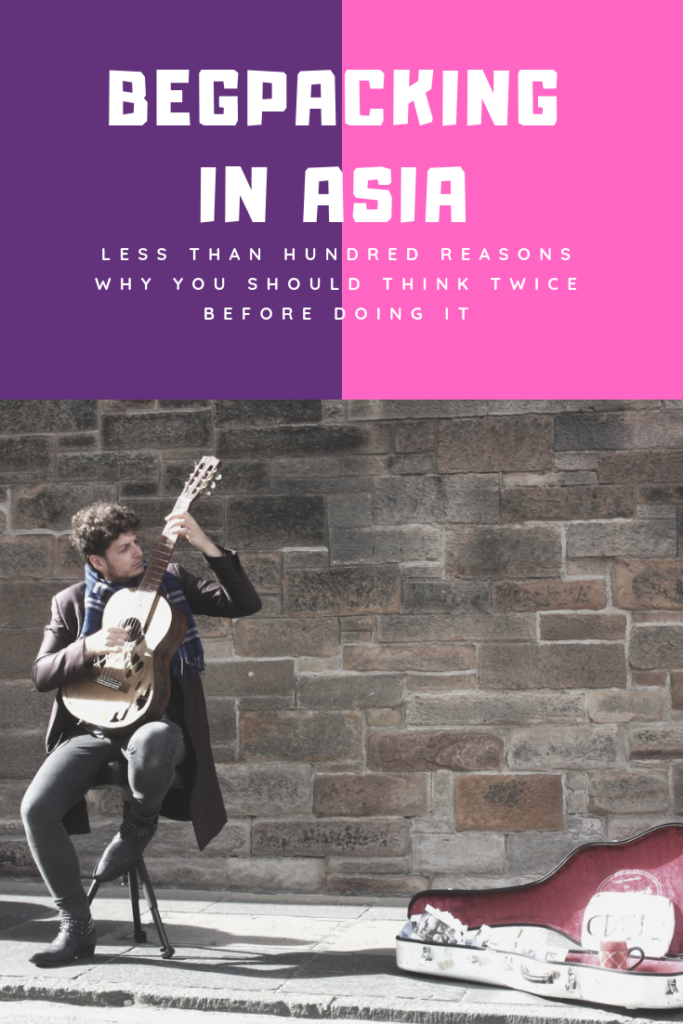 Love and Hate of Begpacking in Asia

Sure I’m salty about begpackers in Asia for some reasons that I will elaborate later, but I’m not surprised that some travelers still see a potential market in this part of the world to beg covered by their art skills through music, painting or whatever.

As much as I hate to admit this, but the locals in the region seem to like foreigners a little too much. Especially if they’re white. I’m not being racist, I’m just trying to tell you the bitter truth about how we see foreigners in general. White supremacy is still effective around here. And it’s not really surprising that we rarely see black people begpacking around here. (Almost) everyone is white.

Asia, especially Southeast Asia region, somehow worships them in a way that they value them higher than the other races. And that’s how it works to attract the locals for the white beggars.

But for the love of God, don’t make this thing to be the reason why you should go begpacking in the region. So, I’m trying to write why you should think twice before doing it, especially in Southeast Asia.

Why You Should Think Twice Before Begpacking in Asia

As the meme above, while it is actually funny to see when you’re either East Asian or Southeast Asian like me, it is also sad at the same time. Why? Because that’s how big the gap between the two regions. That includes the economy, the people, and their attitude.

1. Our local regulations still have a lot of flaws, and it’s not always in our favor.

Take an example from my home country Indonesia, it is in fact so easy to start a business through a home industry. One could just start making chips and all the snacks in their house to see how it is. Like, they don’t even have to think about tax or some inspection from the government to make sure that the edibles are safe or whatever.

While this might sound like a scam for some of you who come from developed countries, this practice actually helps a lot of families. Especially the stay-at-home mothers who could run a small business without having to leave their family.

When my privileged mind comes to think about travelers selling photographs and the stay-at-home mothers selling seblak, sometimes I question whether they’re different as they both have no official license from local government to run their somewhat business.

But look, here’s the difference between the two: one is struggling for their family to bring comfort at their home, the other thinks that living outside their comfort zone is necessary while they’re not financially capable to do it for a start.

2. Don’t take for granted the fact that everything is cheap around here. So is the minimum wage.

I mean, I really don’t wanna try to be a social justice warrior here… But there are some provinces in Indonesia where the minimum wage doesn’t even reach $100 USD. In fact, a lot of people actually work below the standard, sometimes without insurance only to make their ends met.

You’ll be surprised if you find out that there are times when the less money they have, the more they want to give. It is just our culture to think about others rather than ourselves. Please don’t take it for granted.

There are plenty of cases when travelers running out of money in Indonesia. Guess what? They got away with it, thanks to the kind locals… Which will take us to the next point.

3. White supremacy is real over here. And here’s the bitter pill to swallow: you validate it if you still do it here.

Well, the less privileged locals won’t hesitate to ask you for a selfie together if they know that you’re a foreigner, especially when you’re white. If anything, I always say that we Asians are the most racist of all. We try so hard to maintain the fair skin, and that’s how it works in our skincare propaganda.

Honestly, let alone when it comes to races like Caucasian, Latina, Black or whatever… Sometimes we’re even racist towards each other. Stereotyping is real, it’s just when it comes to Asian the scope is getting smaller and smaller.

And the best prejudice of all, that must be for the white. Chances are, you will probably be treated like a king when you’re white in this part of the world. Surprised?

4. You have no idea how hard it is for us to obtain the visa to get to your country for travel purpose only.

Paying more than $100 USD fee for visa application. Checked. Proof that you’re employed with your payroll document. Checked. Bank statement with at least >$5000 in the account…

Let alone filling in the required forms only to apply for one visa in which there is no guarantee that you will eventually get approved. No refund for the fee that is actually worth for a few week meals. That, only to guarantee that we’ll come back home safely without running out of money in the middle of our travel.

In case you don’t know how it is to have a weak passport like ours, then just know that something as simple as our name would lead to the rejection of your visa application. Did you know that the Islamic name like Mohammed and all Muslim names got shadowbanned even a few years after 9/11? You’re welcome.

Honestly though, those I saw begpacking… They are not ones without talents. Because they are. Some have the talents in photography, some others maybe excel at handicrafts when the rest might be either musicians or artists in any kind.

Instead of begpacking, you could actually place your talent elsewhere. Be freaking creative about what you could do that might benefit others!

I mean, if I could comfortably work from home with just my skills scrolling on Facebook and being a couch potato as a virtual assistant… Then you might even earn more while being productive at the same time. Maybe you should start selling your photographs somewhere, or maybe find a client through platforms like Sweet Escape or something.

Why choosing to be a burden for those that might be less privileged than you when there are so many other ways to fund your travel?

Tell me what you think about begpackers/begpacking!

Now that I suppose I’ve poured everything out of my mind about begpacking, what’s your take on this phenomenon? Are you in or against it? Let me know what you think, and thank you for coming to my TED talk. 😛