Recently, there was a drama among my former university friends. It all started out with one friend who suddenly published a super racist tweet against the Chinese. That was super ironic, since we went to a Catholic university with most of our friends and lecturers are Chinese by ethnicity.

The tweet was indeed shocking, but not exactly surprising. Not so much, as I’ve been gossipping about her with some friends not so long before this tweet came out of the surface.

To be fair, I was quite close to this racist friend back in the day. As much as I hate it, I kind of understand the background of how this friend could be the way she is now.

And despite the fact that ever since I’m blocked by her on Twitter, this drama basically gave me an epiphany to create content describing how easy it is to lose friends and make everyone hate you. Like what happened to my friend after the backlash. 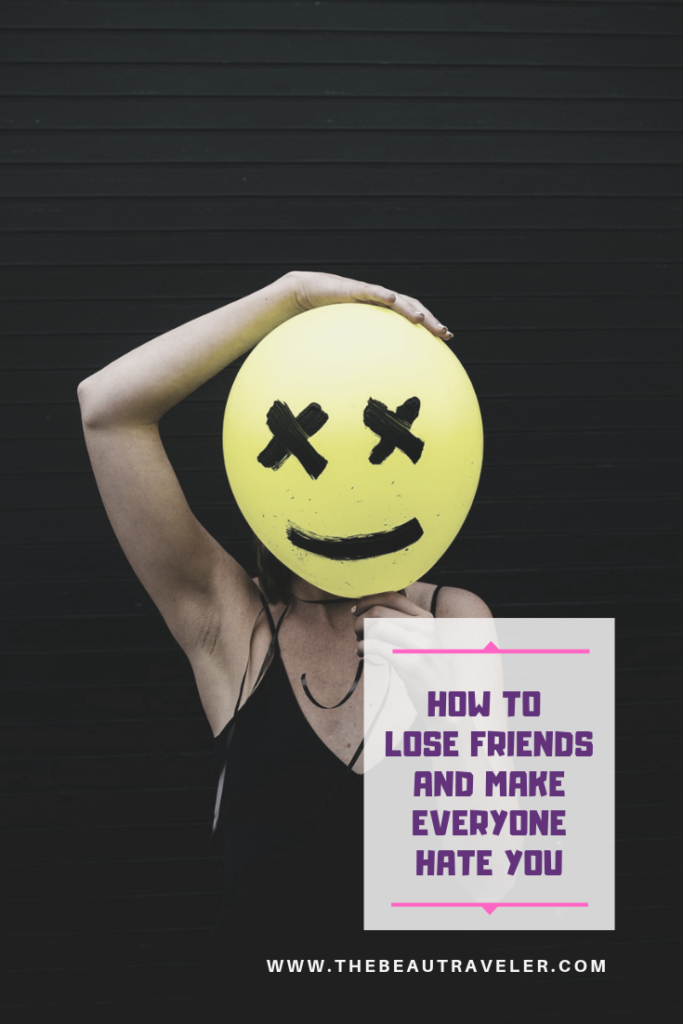 And nope, I’m not writing this just so you could also hate this friend in particular. I’m trying to write this so you could avoid being like her. I mean, sure… You can’t please everyone in any decision you make in life, but still, never forget where you come from.

4 Ways to Make Everyone Hate You So Easily

To give you a context, in case you don’t know… There was a presidential election in Indonesia recently, and the case was pretty much political in a way. Which I’m pretty sure that it might also happen in any other part of the world. You know, the case between the right and left wing, etc.

The rivalry could be healthy in a way, but there are always people who attack their rival in something that has nothing to do with their performance in the political stage. That was basically what happened to my dear friend. Although now that I’m getting blocked, I’m not even sure if we’re still friends to begin with.

To be honest, I don’t even mind since I believe in the effectivity of keeping my circle small.

But in my friend’s case, of course, her statement got a backlash from almost everyone. Think about cyber bully where people talking about you openly and making fun of you. That’s quite ugly.

It’s almost 10 years since we graduated from university, and even though I understand that people change throughout time… I was a bit naive to think that the education that we got back in the days would actually shape us to be more open-minded. Boy, was I wrong!

Your inner circle is what’s important, and it is basically the thing that actually shapes you and the way you think.

In my friend’s case… Well, despite the fact that she was chosen to be one of the assistance for one of our professor in our university time, it didn’t make her immune to any radical thought. Life seems to lead her to close her brilliant mind.

When you decide to be close-minded, you can’t seem to expect to live comfortably in such a plural environment. I mean, how could you expect to stay friends with your Chinese friends when you speak against them openly with pride?

2. Be Offensive. But Get Offended Easily.

Listen up, kids… When you always play victim all the time, it’s guaranteed that even though people try to act nice around you, they probably won’t like you that much.

I mean, seriously though… If you act offensively towards the others all the time, or you talk shit about people for their background everytime, then don’t expect them to act genuinely towards you?

Karma is a bitch, and there are times when God wants you to know that sometimes you just deserve it.

3. Always Think That Your Opinion Matters, But It Doesn’t Apply to Anyone Else.

Just because you think you’re the smartest person in the room, it doesn’t mean that you’re always right. There’s always a learning curve in life, no matter which aspect you’re talking about. But the key to gain more knowledge is to be open-minded.

It’s important to have a willingness to learn. But when you’re a close-minded person who think she’s right all the time, I’m sorry to break this to you… Not only is there no hope for you to grow as a person, but there’s a chance that you’ll be isolated with your way of thinking.

There might be some people that would probably choose to leave in your life. Don’t act surprised when it happens.

To be honest with you, I feel really disappointed with her statement against the Chinese as I thought she’d knew better. My expectation was so high towards her, as we lived in such a plural environment and a lot of our friends are Chinese by ethnic. Not just our friends, but also our lecturers.

Basically, we couldn’t finish our undergraduate without them at the university. Like, how rude… And could you even more stupid? I thought you were better than that.

Honestly, seeing her these days… It’s just one thing that I’m so sure of: avoid anyone that shows bigotry values for the sake of my sanity.

Got any other way to help you lose friends? Give me a shout in the comment section below, and cheerio!