I really overestimated my ability to finish the rest of my Borneo trip series. It’s been almost 4 months ever since I came back, and I only finished up to my Miri journey so far.

But no worries, because sooner or later, I’m committed to sharing everything with you. I hope the complete series of my Borneo trip would be able to help anyone who’s keen to start their journey on the island. One big island, with three different countries that are definitely worth to explore.

And this time, I’m gonna write about my experience to fly with MASWings for the first time. MASWings is the regional community airline which provides services throughout East Malaysia states, Sabah and Sarawak in Borneo.

I flew with them when I departed from Miri, heading to Bario. Not only was it my first time to fly with them, but also it marked the first time I flew with a small aircraft like Twin Otter. And therefore, I’m so keen to share it with you. 🙂 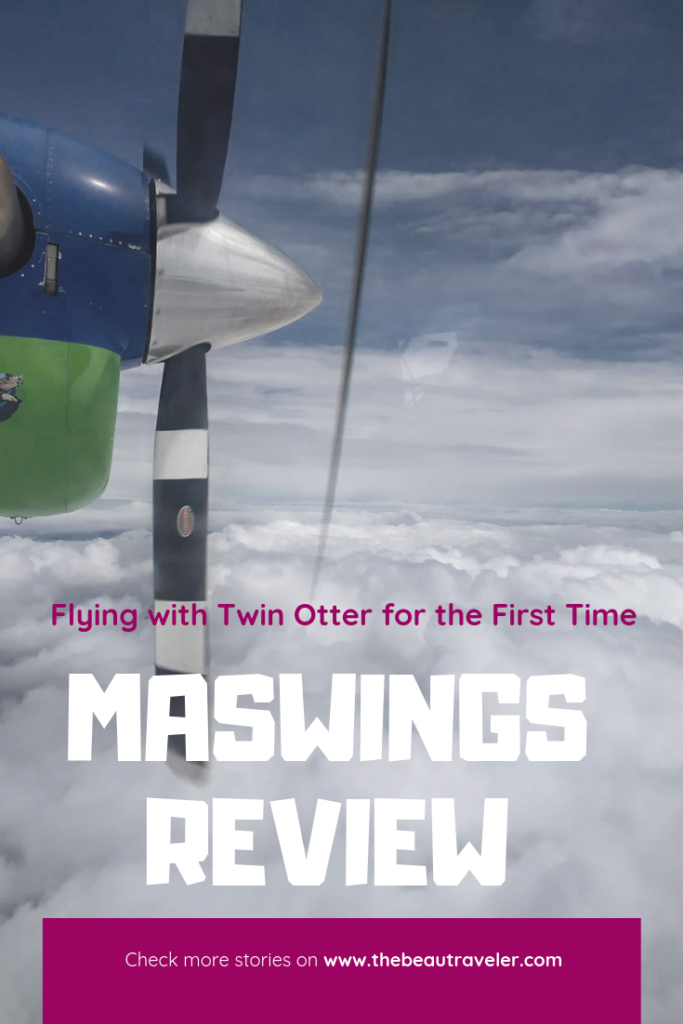 Flying to Bario with MASWings

During my early planning for this Borneo trip, I actually had zero knowledge about Bario. It was probably around a month before my departure as I saw one of Instagram accounts that I follow, she posted a throwback pick taken in Sarawak. And of course, it was taken in Bario that made me curious about what this place was all about.

Before I saw the pic, I honestly didn’t know anything about Bario or Kelabit Highlands. I mean, I was totally ignorant when it comes to anywhere in Borneo, particularly in Sarawak. But then I read the caption. She mentioned that the place was so secluded in a way that you couldn’t even get any internet reception there.

It made the place sound even more intriguing, so I did my own research. It didn’t take long for me to decide whether to go there or not. So my final decision was to skip Ulu Temburong all at once, and instead, I added Bako National Park on my itinerary.

Before finding out about Bario, my go-to options were only either Niah Caves or Gunung Mulu. And I’m so glad that I randomly found information about Bario so that without a doubt, I decided to go to Bario instead.

My consideration is that I could go to Bako for nature. As for Bario, I could go for both nature and experience. It sounds like a win-win.

MASWings Flight from Miri to Bario

As I did my own research on how to get to Bario, I figured that I could make Miri as my starting point. There are a few daily flights from Miri to Bario and the other way around. We could also rent the 4WD from Miri, but that would be super expensive although it might sound like an option if you travel in a group.

Anyway, while some are non-stop flights with the aircraft flying directly to Bario from Miri, some of them are direct flights via Marudi. Please be cautious on which flight you’re taking, in case you’re not a big fan of flights with transit. 🙂

As for me, I’ve chosen the first one as it seems like the only logical option that I could take. Not to mention that I had to catch a bus to Brunei on the way back.

I took the first flight from Miri to Bario with ETD at 9.15 AM (GMT+8). On the way back, I chose the last flight from Bario to Miri, the one departed at 01.35 PM (GMT+8). I booked everything through MASWings website, and I’ve purchased the return ticket for MYR 225 (around $55 USD).

Before the flight, I was kind of nervous. So, the limited total checked-in baggage that we could carry on board was only 10 kg. Therefore, I only took my backpack with me to Bario.

I couldn’t find any information about whether they provide lockers at Miri Airport or not. So, what I did with the rest of my belongings was to charter my Grab driver Lionel and ask him to keep my luggage until I came back.

I’d consider myself lucky to meet him, because my journey was 100% smooth in a way my big luggage was safely kept. And also, he picked me up on time at the airport so I could make it to Pujut on time as I had to catch the bus to Brunei. Totally recommended!

You can also contact Lionel Brodie if you need a car and a driver around Miri at lrbrodie@gmail.com.

Anyway, so I took my backpack only. And I was surprised when I went to the check-in counter, and the staff asked me to weigh myself along with my belongings. There is literally a digital scale to weigh our body mass there, and it was a bit surprising and embarrassing at the same time! 😛

So the staff asked me to weigh myself and my belongings on the scale, and I thought the result would only for the manifest purpose whatever.

As it turned out, the total weight of my body mass, as well as my backpack, was written on my boarding pass. 69 freaking kilograms! 😛

It was literally the first time I had to fly with weighing my body as a part of the boarding procedure.

I never flew with a small aircraft like Twin Otter. My first time flying, it was to Doha from Jakarta with Qatar Airlines, and I think it was A330. Other than that, I mostly fly with either B737 or A320, in addition to the aircraft that I operated during my flying time as a flight attendant: B747.

So honestly, I got really excited on the day I flew to Bario with MASWings. Especially since it was with a small aircraft.

My flight to Bario was delayed for around an hour due to bad weather. But then again, it was understandable. I didn’t want to take the risk of flying with a small aircraft in bad weather either.

However, I was a bit nervous that the same thing would happen on the way back. But thank God, the flight from Bario to Miri was on time so I could catch the bus to Brunei without any worry.

As it turned out, Miri airport wasn’t really that big. It was rather a small airport that kinda reminds me of Bandung airport. All the passengers would wait at the same boarding gate, all as in passengers for both domestic and international flights.

Around 30 minutes before boarding time, the staff would announce our flight number to allow passengers to get on-board, and we’d be sent to a waiting room where they would show us a safety instruction video on TV.

Fair to say you’ll get disappointed if you expect to have IFE on board.

Comfort during the Flight

The aircraft probably fit for up to 20 passengers. And this is the kind of flight where we passengers don’t have any border with the flight deck. So for those who are obsessed with the chance of dating the man in the uniform, use this opportunity wisely! 😛

Even though I got to choose the seat number while booking the flight ticket, as it turned out it was free seating during the flight. Like, you could seat wherever.

On the flight to Bario, I chose to sit based on my seat number in the front. On the way back to Miri, I decided to sit in the aft as I wanted to know the difference and which one was the better position.

I heard that flying with a small aircraft could cause nausea and some other discomfort. And now that I’ve flown with one, I could totally confirm this. Not only that it was rather noisy, but the nausea was real though.

If you’re prone to nausea or some kind of air sickness, I think sitting in the aft would be better than in the front. I felt worse when I was flying to Bario, sitting behind the captain. When I sat at the back of the aircraft, I didn’t feel as dizzy.

However, if there’s one thing that made me feel so happy that I decided to take this flight, I think that would be the view that I got to see from the top.

The Beauty of Borneo from the Top

As an Indonesian, I’ve been familiar with the nickname ‘Zamrud Khatulistiwa‘, which literally means ‘the Emerald of the Equator’ when it comes to Borneo. Honestly, I never really understand the meaning behind the name. Like, why emerald?

Surprisingly, I’ve found the answer on this flight with MASWings. The flight from Miri to Bario, and vice versa, barely took an hour in total. But the whole flight, you could see the beauty of Borneo from the top. It was all green, and 100% beautiful. That’s when I realized why it’s called the Emerald of the Equator.

The view that I’ve seen below was definitely a gem in the world. And it was all green. It was so beautiful to the point that I actually got burst into tears. Honestly, it was so beautiful that I felt so close to God at that point. Does it even make sense?!

The Verdict: Flying with MASWings from Miri to Bario

Well, everything about the flight is quite basic. The flight, the facilities, and even the service.

But given the idea that there’s a limited option for you to get to Bario, MASWings is quite decent. They follow safety procedure and avoid flying in the bad weather. The flight ticket wasn’t super cheap, but it was worth the price.

I’m genuinely glad that I finally got a chance to fly Twin Otter for the first time. Do I want to repeat this experience? I’d say, why not?! 😉

Have you flown with Twin Otter before? Where did you fly to, and how was your take on it? Share your experience in the comment section below, and cheerio! 🙂

One thought on “MASWings Review from Miri to Bario: Flying with Twin Otter for the First Time”