Sibu was the fourth city that I visited during my last Borneo trip. Before I arrived in the city, I had zero knowledge about the city as I only checked out the map of Sarawak when I tried to make an itinerary and skim read on what I could visit there. After reading some articles about Sibu, I then decided to make a stop around the city.

As it was on my plan to take a long road trip to get to one city from another, almost all my journey taken during Borneo trip was by bus. So was the trip to Sibu.

From Kuching to Sibu, there are some options you could take that include flights, bus, and even by ferry boat. 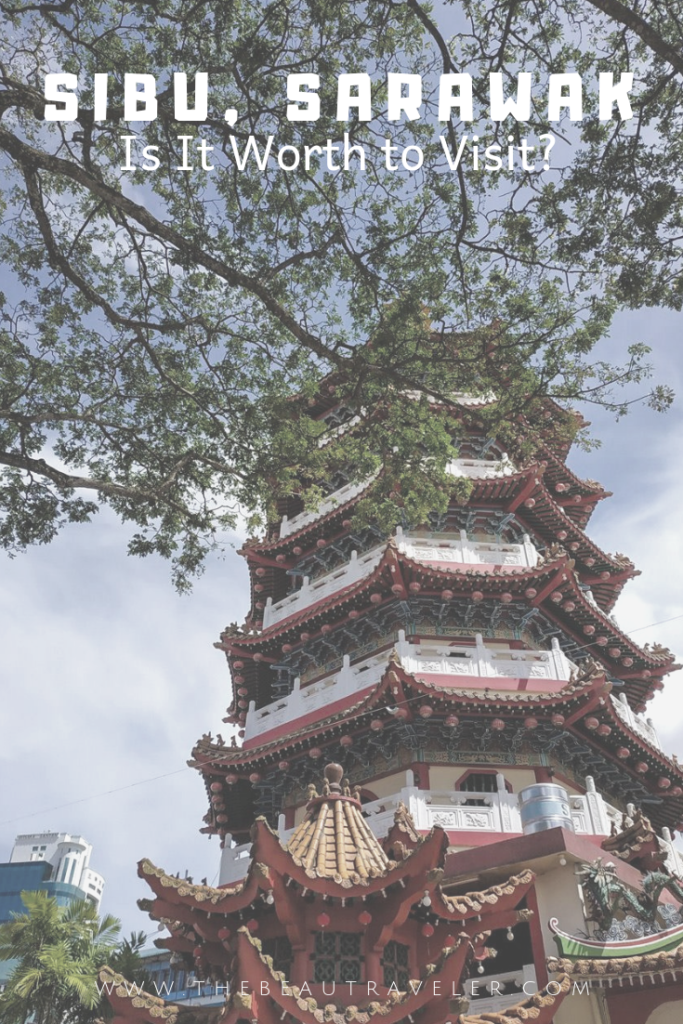 How To Go to Sibu from Kuching

In case you didn’t know, my favorite platform to use for any road trip taken around Southeast Asia is Easybook. And that’s where I booked all of the bus tickets taken for this trip, including the bus from Kuching to Sibu.

There are some bus options that you could take from Kuching to Sibu, and there are plenty of bus operators that you could choose for the route. Through Easybook, at first, I booked the ticket for a night bus to Sibu by Sinar Harapan. I paid the bus ticket online for 40 MYR (around $10 USD).

However, by the time I got to the bus station to claim my ticket, I suppose they discontinued the route from Kuching to Sibu and their staff asked me for extra 20 MYR (around $5 USD) so they could transfer me to another bus operator that could take me to Sibu on the same schedule.

Then they informed me that I’d take Eva bus to Sibu, but then I checked on Easybook to get the price to compare. As I checked the price there and it was written that the ticket was only 50 MYR online, I came to Sinar Harapan counter and the staff acted silly and said that he miscalculated so he gave me a change for 10 MYR.

I was a bit annoyed with the fact that he thought that he could scam me, but then I’m glad that I checked so that I could claim this to avoid spending too much money for unnecessary stuff like this scam.

As I spoke to Oliver, the owner of Woodpecker Lodge earlier in the morning, he suggested me to take a ferry boat instead if I ever visit Kuching with Sibu as the next stop again sometime in the future. Ferry boat is probably the best way to take from Kuching as it takes a shorter period for the trip, compared to the bus.

For comparison, I took the bus with Eva Bus for around 6 hours in total. As Oliver told me, if you take a ferry boat to Sibu from Kuching, it will take only around 4 hours despite there’s only a ferry boat departing daily from Kuching and it’s usually early in the morning.

Whichever way you plan to take from Kuching, you can book everything in advance through Easybook.

What to Visit in Sibu, Sarawak

When I had a chat with Gabriel on my way to Semenggoh, I told him that I was going to Sibu after Kuching and he told me that Sibu is most recommended for the non-halal culinary experience. However, other than that, there’s nothing much to see around Sibu.

Before I went to the bus station, I spoke to Oliver about my plan to Sibu and he told me that Sibu Central Market is actually the biggest wet market in Southeast Asia. So, it’s probably worth to visit it while I’m there.

You see, I had zero knowledge about the city that I didn’t even know that there’s such thing like the biggest wet market in Southeast Asia when I planned to come to the city.

Anyway, I made my itinerary based on the information I got through the internet. And here’s my two cents about whether Sibu is worth to visit or not.

This temple is probably the primary tourist attraction in Sibu, right after the wet market. People come here to pray for a better life, as well as to just admire the unique architecture of the temple. For some ignorant millennials, of course, this is one of the instagrammable spots in the city as well.

To my surprise, the temple is only walking distance from my hotel. It took only around 5 minutes for me to reach this temple while I was in Sibu. After a while, when I realized that there’s nothing much to see around Sibu, I actually spent my time around the temple for so many times.

The temple is located only around 200 meters from the central market, and it’s situated around the port that you could just sit around the garden to enjoy the sunset there.

Not so far from the temple, there’s also some food court where you can stop by for dinner. There’s nothing fancy, but it’s not so bad either. Honestly, I could have done better if only I did deeper research when it comes to what to eat in Sibu.

But I didn’t, so if anything, from all the food I’ve tried in Sibu, I still think that the food in Kuching that I’ve tried are much better.

When I stopped by the central market, no wonder Oliver said that it’s actually the biggest market in Southeast Asia. I think it’s a 3-story market full of stalls selling vegetables, fruits, and live poultry.

Since I’m from Indonesia, I was amazed by how organized the market is. I mean, forgive me for being so tacky in a way, but I’ve never really seen any wet market that is more organized than this in Indonesia.

The veggies and live poultry section are situated on the first floor, while there are many other stalls in the second and third floor as I strolled around. On the third floor, you can also find so many stalls selling clothes in such affordable price. Well, I didn’t really plan to do some shopping there, so I didn’t bother to stop by trying to haggle.

The museum is one of the top destinations to visit in the city, as they said that it’s one of a kind in terms of a medical museum in Malaysia.

The name of the hospital, Lau King Howe, is named after the philanthropist who ran a rubber tree plantation. He donated a lot of money to build the hospital, and you could read some of his history in the museum.

The museum displays a lot of old medical equipment along with some old black and white photos that are supposed to bring you back to the early settlement of the museum. This might be interesting for some people, but frankly speaking, I found it rather boring.

The good thing is that you can enter the museum for free. There’s no charge to gain more knowledge about the hospital in this museum, as they only need you to fill in the guest book and that’s all about it.

If you come from Malaysia, or know a little story about Malaysia in general, this place might be interesting for you in a way they show some pictures with (supposedly) notable people in their era. However, since I know nothing about it, I really had no clue about which is who or why they’re special etc.

This memorial garden is actually one of the places that got me really excited to visit Sibu, as I read some articles about it and how this place is built based on a strong sense of history. Unfortunately, when I got to the place, it was rather disappointing.

Like, I’m not sure if it has something to do with the fact that I went there when the weather was so hot, but this garden is located fairly far from the city center where I stayed.

The garden is situated around Sungai Merah town, and it cost around MYR 8 (around $2) by Grab from my hotel to this garden, and beside the statue of Wong Nai Siong, there’s nothing much to see around there. 😐

Anyway, the garden was built as the landmark to remember the Foochow immigrants who came to Sibu in 1901, led by Wong Nai Siong.

Hoover Memorial Garden is located in such an awkward location in a way it’s actually not so far from Wong Nai Siong Garden, but then again it’s fairly far if you walk from one place to the other.

However, since I was trying to get on a budget and walk as often as I could during my trip, I decided to walk and it took me around 30 minutes.

Just mind that most of the road around this area is not really pedestrian-friendly, so despite the fact it isn’t so far, you still have to be vigilant about the cars passing this road while you walk.

If Wong Nai Siong Garden is dedicated to the leader of Foochow immigrants, just like its name, Hoover Memorial garden is built to commemorate the contribution of Reverend James Hoover, a US missionary who had spent his life in Sibu. The garden itself is built by the Methodist churches in Sibu.

The short history about the Reverend was written on the wall around the garden if you’re not so familiar with the name like I was.

I almost skipped this building, until on my last night in Sibu and I got nowhere to go so I ended up strolling around the area and I got to the church that was actually so close to my hotel.

Next to the church, there’s also Hoover House and Methodist Primary School, which was the first primary school in Sibu. The school was initiated by the Reverend and his Mrs.

One of my blunders done by me when visiting Sibu is that I decided to visit the heritage center on Monday, which was my last day in Sibu. Just know that Sibu Heritage Center is closed on Monday, so if you’re planning to visit Sibu and keen to visit it, please don’t do the same mistake as I did.

So really, I spent most of my time in Sibu strolling around and drinking boba. 😛

So, Is Sibu in Sarawak Worth to Visit?

I didn’t regret my decision to stop by Sibu. However, if I could, then I wouldn’t mind having skipped this city as I found it rather boring compared to the previous cities that I had been in Borneo.

But then I’m glad I made my way to get here, so next time if I get a chance to go somewhere around Borneo again, I could have just picked some other destinations.

My only recommendation is that if you’re planning your way to Sibu anytime soon, do some research on what to eat around Sibu. Especially if you eat non-halal food, it seems like a great place to explore your foodie experience.

One thought on “Is Sibu in Sarawak Worth to Visit?”