So glad to finally see you again on this $10 series, and this week we’re going to cover a city full of history in the southern part of Europe.

It’s the city surrounded by Mediterranean sea, where not only can you just have a lazy day sunbathing at the beach, but also gain some knowledge in the museum to learn more about their history. Yep, it’s the city of Almeria in Spain, a part of their autonomous community in Andalusia!

It’s such a great opportunity for me to connect with Roxana from Nosy Suitcase, who was willing to share with us how to spend the most of your $10 USD in Almeria. 🙂 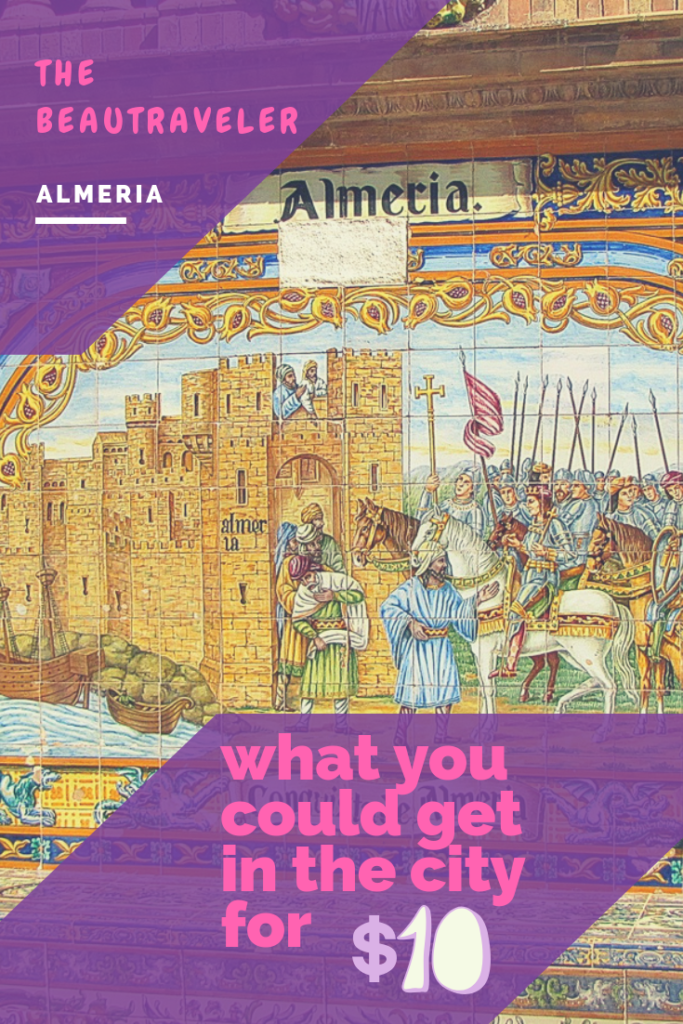 How to Make The Best of Your Euro in Almeria

Almeria is one of the sunniest cities in southern Spain, in the lovely region of Andalusia. It’s both quiet and full of life, so I am definitely sure you have plenty of choices on how to spend your free time.

The local currency is Euro, which means $10 USD would be approximately €8 Euro.

If you are a citizen of EU countries, then the entry to most of the museums would be free. Even if you’re not, then it doesn’t cost much as you only have to pay for a really small fee.

I think those that represent a “must-see” in Almeria would be the Museum of Civil War and the Alcazaba.

Are you interested in getting to know more about the Spanish Civil War? No worries, as Almeria has the Museum of Civil War. It is composed of 9 meters deep underground galleries, which were designed to shelter people during the bombing occurred in the city back during the war.

Only 30 people are allowed down in these old underground bomb shelter at a time. As guided tours are conducted only a few times a day, make sure to reserve a place for you on the tour. Despite the tours are only available in Spanish, they are worth your time and I highly recommend them.

Alcazaba is the biggest of the citadels built by the Arabs in Spain. Its construction began in 955 and ended in the 11th century. Like most Arab legacy, it was taken over and transformed by the Catholic Monarchs.

The architecture inside the citadel is gorgeous as there are a nice garden, a typical Arabic pond, and typical Moorish fortifications.

Allow yourself to spend about 3 to 4 hours to enjoy the most of your visit here.

By climbing the towers, you will also get the best view of the city and the port, as well as the famous gypsy caves from the neighborhood “La Chanca”.

The fortress itself has 3 parts, where the first two are Muslims and the other one is Christian. Each is easily identified by its canons.

A Trip to Europe’s Only Desert

Take the bus from the Estacion de autobuses that is located not so far from the city center. Be sure to have some water and a hat with you!

According to Ken Jennings from Condé Nast Traveler, this is Europe’s only desert. The climate is semiarid Mediterranean and rainfall does not reach 250 mm per year with an average temperature of over  17° C.

A lot of Western movies have been filmed there. To name a few, there are Indiana Jones, Lawrence of Arabia and Exodus.

Climb the top of the hills, and you can have a better view of the desert. Don’t forget to take some amazing pictures there too!

Touristy bars are nice, but don’t forget to follow the locals’ recommendation!

The best you can do is to order a Spanish dish and not an English one.

You may struggle a bit with Google Translate, but the English menus are sometimes a bit tricky and they could be very different from what you expect. Plus, you’ll miss on the free tapas that are offered along with the drink.

Go on a narrow street around the Cathedral of Almeria, and visit one of the tapas bar, as they will definitely have some affordable and tasty tapas.

Stroll Around the Beach

The beautiful beaches of Cabo de Gata are quite well-known, and its location is so close to Almeria. However, even the city of Almeria has a wide beach as well.

It is free to get there, and it only costs you around €1.50 Euro if you opt to take the bus from the city center. If you’re strictly on the budget and in the mood for an exercise, you can also walk around 20 minutes to get to the beach.

The beach is clean, and the sand is perfect for a lazy day. The place isn’t very touristy either, so if you go during the week, you’ll see mostly just teenagers and the elderly.

If you’re up for a lazy day, you can simply just rent a chair and an umbrella along the coast for €5 Euro!

Are you convinced to visit Almeria for your next trip? Book your flight ticket for next summer!

Roxana is a Romanian expat living the English dream. Nosy and itching to travel everywhere, she is currently combining her full-time programming job with the passion to explore new places and at the same time, discovering herself!