5 years ago, I would have pictured myself being someone’s wife and mother, boy was I wrong!

Last weekend, I went out for a drink with my girls. It was the three of us, and all of us are approaching the age of 30 and we’re all single too. We had a good time together, from going for some grocery to talking some random things about life.

That, until one of them, burst out the mystery that she has kept for years. It was about the end of her relationship with her long-term partner. She’s the kind of person who could have kept everything for herself forever, so I’m glad that she could open up even though it took years for her to move on and tell us what happened.

But then a wise person would tell you not to cry because it’s over. Instead, smile because it happened. And it’s true. 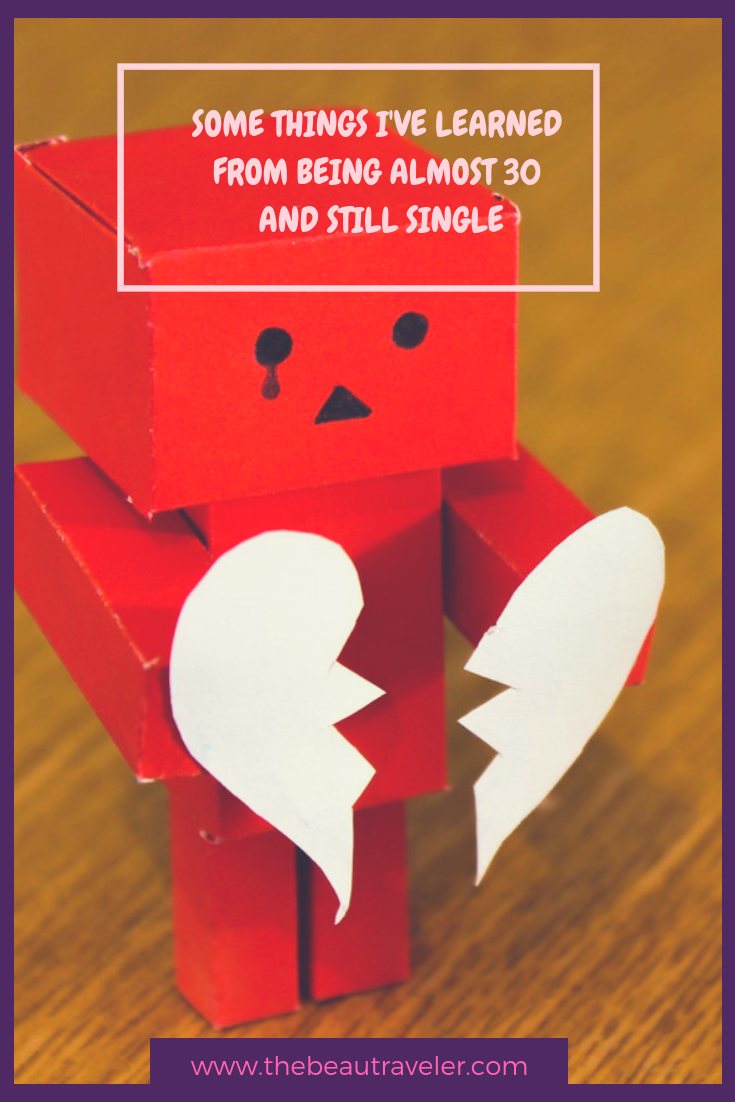 So on this post, I want to share something that is rather personal that I’ve learned about being single when I’m almost 30.

1. It’s okay to occasionally question yourself about what’s wrong with you that makes no one wants to be with you. Be better for yourself anyway.

Just a few weeks ago when I had to attend my cousin’s wedding, my sister and I got engaged in a conversation where we had to admit the somewhat mid-life crisis that we’ve got. Like, what’s wrong with us that makes us so unwanted? At least, for someone to date us anyway.

I’ve listed so many qualities that we’ve got and I wonder which part of us that is a big no that makes people so hesitant to be with us.

I mean, it’s so hard not to feel salty when you see that people have a better life with a beautiful family and the kids and whatnot these days. And you look at yourself, you realize that you don’t look horrible and you’re so sure that you’ve also got a stunning personality. Yet no one wants to be with you.

Half-joking, I even asked my friends that what could have been wrong with me. I mean, I’m not Victoria’s Secret model but I’m quite attractive anyway. I’ve got a job and I don’t rely on others to pay my bills or anything. I’m not even that picky as I had one-night stands for more times than I thought I would.

And if they say that my way of thinking might be way ahead of time for fellow Indonesians, for the love of God I could also speak English yet no one who speaks English is interested in dating me.

But then I make peace with myself for being so overthinking about this issue, and despite being disappointed for what could have, I decided to be a better version of myself anyway.

Earlier this year, one of my girlfriends told me that she thought about getting divorced. They were in a long distance marriage and her husband got redhanded, cheating with someone else. They were trying for kids for several months but didn’t succeed. And of course, my friend got pissed off.

You might think that they got divorced by now. Nope, that’s not what happened.

What happened is that some time in April, she came back home really drunk.

I totally understand this. Of course, alcohol must have been your best friend when you’re thinking about getting divorced. Bonus point as you come from a good Christian family and your grandpa is a priest.

Her husband was there when she came home, and the amount of alcohol she had was enough for her to beg for sex and that happened. The next thing she knew, she got pregnant. That, when the gynecologist suggested her to have A to Z if she was trying for kids.

The last thing you want when you’re thinking about divorce is getting knocked up. But life is so mysterious that her husband decided to be there for her, and he has learned his lesson. Moreover, he got even relocated for his job so they could live together for good.

3. While you don’t have a love story on your own, it’s always fascinating to open up your ears to listen to someone’s.

I mean, my life is so flat that I can’t remember the last time I cried myself out because I broke up with someone. When it comes to romance, I’m sort of hopeless. Like, my love story is not the sweetest, but neither is it the worst. It’s boring because there’s almost nothing on it.

But then when I open up my ears to listen to what people have been through, I’m fascinated with the fact that they could pass through it. Two of my best friends had the experience to cancel their wedding for two different reasons.

I could never imagine this to happen to me. But I’m so proud of them for passing this difficult situation.

One of them had to cancel their wedding because of the parents. Her (ex) fiance had to marry someone else for an arranged marriage due to something that has something to do with his parents. Not his. Not hers. His parents.

The other one was still dating her boyfriend, with whom she started their mortgage for the future home. They even bought a car together with their initials on the car plate. That, until she heard from someone else that her boyfriend was getting married because the girl he hooked up with got knocked up. He didn’t even have the guts to tell her.

Hearing their stories, I could never be more proud of them for being such strong women who could endure all the pains. And for the love of God, they’ve got all the qualities to have everything in life. I just hope everything will get better for them. And for me too.

4. There will be some people who bug you for their perception towards you. You have a right to fight.

One thing that I’ve learned the hard way is this: you can’t please everyone.

That includes your extended family who cares way too much about the fact of you being single. At one point, if you’re unlucky, you’d get the whole lecture about how at your age, you should start thinking about the future. The future for them is to get settled and married to someone.

Maybe you actually start thinking about the future, but it’s not about settling in and starting a family. Tell them off, and explain that it’s not exactly what you have in mind. Maybe you have to get into an argument for a bit. Trust me, it’s worth it.

You see, at times I wonder whether I will ever settle down. Other times, I feel like I have this huge desire to start my own family with the mini me and whatnot. But until then, I think I have to enjoy what they say about being single in their 30s: pretty much like the 20s, but with money.