Still another post related to my last Singapore trip! 😀

As I mentioned earlier, if there was one place that I really wanted to visit in Singapore, then that would be Kranji War Memorial. I don’t know how many times I’ve been to Singapore by now, but I’m not going back to some recommended places for tourists like Gardens by the Bay or Universal Studio. 😛

The thing is, lately I always have this urge to visit the cemetery wherever I travel, especially if it’s a war cemetery… Why? Because I suppose that’s the best way to remind myself not to take life for granted. But other than that, there’s something that makes me want to visit the cemeteries even more.

It was when one time, I posted a pic I took at Taukkyan War Cemetery on Instagram. Another user randomly commented it telling me that her Grandpa is there. I was confused what she meant until she explained that her late Grandpa was a soldier for the British Army and died in Myanmar during World War 2.

She never got a chance to visit his grave in Taukkyan, but she got his block number and left it with me just in case I’m coming again for a visit. I was a bit emotional when I exchanged messages with her through Instagram DM. 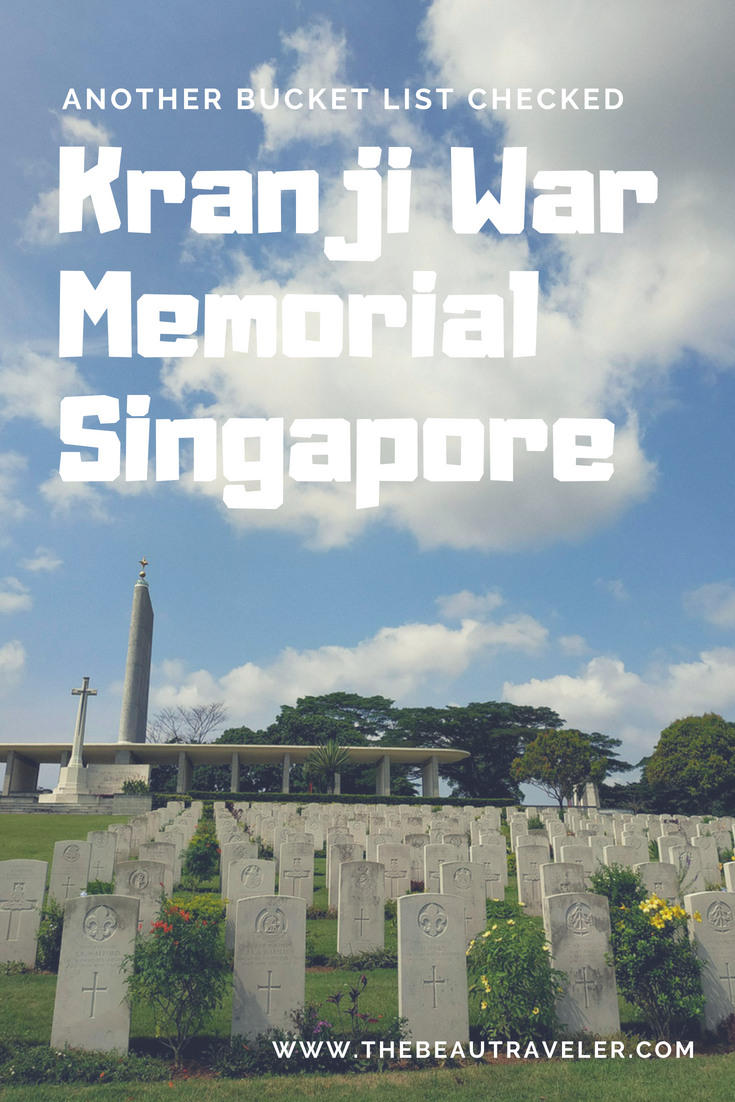 I Didn’t Go There Alone!

Yesss, if you’ve religiously read my blog (lol who have?!), you’re probably familiar already with Shi Hui from IReviewURead! 😀

So, when I was planning out my trip to Singapore, I contacted her and she happened to read my post on planning the trip to Singapore as she told me that she’s never been to Kranji either. So, we arranged the trip on my second day in Singapore before I went to Arsenal vs Atletico Madrid match in the evening.

We were planning for a collaboration somewhere, I even suggested to talk bad things about our ex so we could bury the memories in the cemetery… Until I realized that it would have been disrespectful for those war heroes who rested there. RIP.

Anyway, I’m glad that I ended up going to Kranji with her… Because as it turned out, Singapore was ridiculously hot when we went there.

No kidding, it was the kind of hot that literally burnt my skin.

And why did I say that I was lucky that I went to Kranji with her? Yessss, because she’s so well-prepared that she literally had everything we needed during the journey.

From takoyaki-flavored candy that she bought randomly in Japan (it didn’t taste horrible, but it was definitely a bit bizarre!), to an electric portable fan and an umbrella. Seriously though, I was amazed! 😛

Kranji War Memorial was once the burial ground for the Woodlands Military Hospital during the Japanese Occupation in Singapore (1942-1945) until the Commonwealth government transformed it into the military cemetery after the war.

Despite the big cross in the center of the cemetery, Kranji War Memorial is not exclusively a Christian memorial site. We can actually find some other religious symbol in some tombstones, and it was clearly stated in the intro sign in front of the cemetery area.

When we reached the gate of Kranji War Memorial, the welcoming wall with “Their Name Liveth For Evermore” reminisced me of Taukkyan War Cemetery in Myanmar. I suppose it’s some kind of default that all cemeteries maintained by Commonwealth War Graves Commission have? I don’t know, since I’ve only been to Kranji and Taukkyan so far.

How To Get There

I tell you what, Kranji is actually closer to Malaysia than Singapore city center. So, if you’ve done a road trip from Singapore to Malaysia (or the other way around) by bus, I suppose you’d be familiar with Woodlands. Woodlands is where the Singapore immigration located, and Kranji is not so far from there.

Well, Kranji is not exactly the main tourist destination for those who visit Singapore. But then if you were like me, those who are obsessed with the cemetery, then I think a trip to Kranji could be quite a journey. 🙂

With Singaporean MRT system, you can get around easily despite the distance.

To get to Kranji War Memorial, you can take the red line by MRT and stop by Kranji station. From Kranji station, it was around 30 minutes walking.

In fact, if you asked me, I think the distance between the MRT station and Kranji War Memorial is a bit awkward. You know, in a way it is ridiculously close if you decide to book Grab but it takes quite awhile if you decide to walk. I mean, especially with the Singaporean heat. 😛

As much as I wanted to enjoy my trip there, I couldn’t resist the fact that I was an introvert with the tendency to get angry when the sun shining. Not to mention that my skin got burnt with the heat in Singapore that day.

The heat not only stopped me and Shi Hui to create a collab content while I was there, but also stopped me from exploring more about the cemetery. Like, if I usually get excited to take a pic of the wall full with the name of the war heroes buried there, this time I didn’t.

Instead, we just took some time to sit down while cringing about the weather and fanning ourselves. *Asian probems lol*

I didn’t even pay attention to the fact that the layout of the cemetery actually represents the three branches of the military. With the columns for the Air Force is shaped like the wings of a plane, and the sail for the Navy.

There was also an empty area whose tombstone belongs to the second president of Singapore, Benjamin Henry Sheares. To be fair, I wasn’t really familiar with the president… Being an ignorant foreigner, when talking about Singapore, I could only understand the name Lee Kuan Yew given the chance to talk about politics.

The awkward moment happened when Shi Hui and I reached the Mr. Sheares’ tombstone and I asked her where was the last resting place of Lee Kuan Yew, and Shi Hui awkwardly answered she didn’t know. But it must have be somewhere in the city center. *failed as Singaporean because of she is as a person 😛

Is Kranji War Memorial Worth to Visit?

The answer could vary, since it really depends… Honestly, I wish I could enjoy Kranji like I did Taukkyan or Taman Prasasti Museum, but the heat really turned my mood off.

The thing is, while I relatively enjoy my trip to Kranji because it had been on my bucket list for awhile, I can’t really avoid the fact that I am more like a vampire who hates the sun as it kills my mood. Pretty much what happened in Kranji that day.

But, but I wasn’t disappointed with the trip at all because as I said, I really wanted to visit Kranji at some point in my life and I did. Besides, this could be one of the options to go if you really want to explore Singapore on a budget as I did at the time. 🙂

So, I think before you put Kranji on your itinerary, better ask yourself first whether you really wanted to go.

I mean, we’ve met some tourists who come with a bus and a tour guide, I suppose they would find Kranji ‘okay’ as they didn’t have to walk under the sun for half an hour.

But if you’re more into shopping and you don’t fancy walking too much, and you have to arrange the trip on your own, I think it’s better for you to stay at the city center. Your call!

After reading this, what do you think about Kranji? Hit or Miss? 😉