Long before the raising of K-pop phenomenon, I got some kind of Taiwanese fever through F4 and Meteor Garden.

I mean, if there’s anything that I gotta admit, then it is the fact that although I don’t understand anything about anything Korean, back then I had a full set of albums as well as DVDs from this Taiwanese boyband.

And yes, my rants here have something to do with what we’re going to talk about on this week’s What You Could Get In The City For $10. This week, we’re going to cover the capital city of Taiwan, Taipei.

Now, it is impossible for me to publish this piece without the contribution of duo Daniele and Elena from Cycloscope.

Also, have you watched Wong Fu’s Asian Bachelorette?! If you haven’t, then you should because I totally lost it at Taiwan and Thai Food. 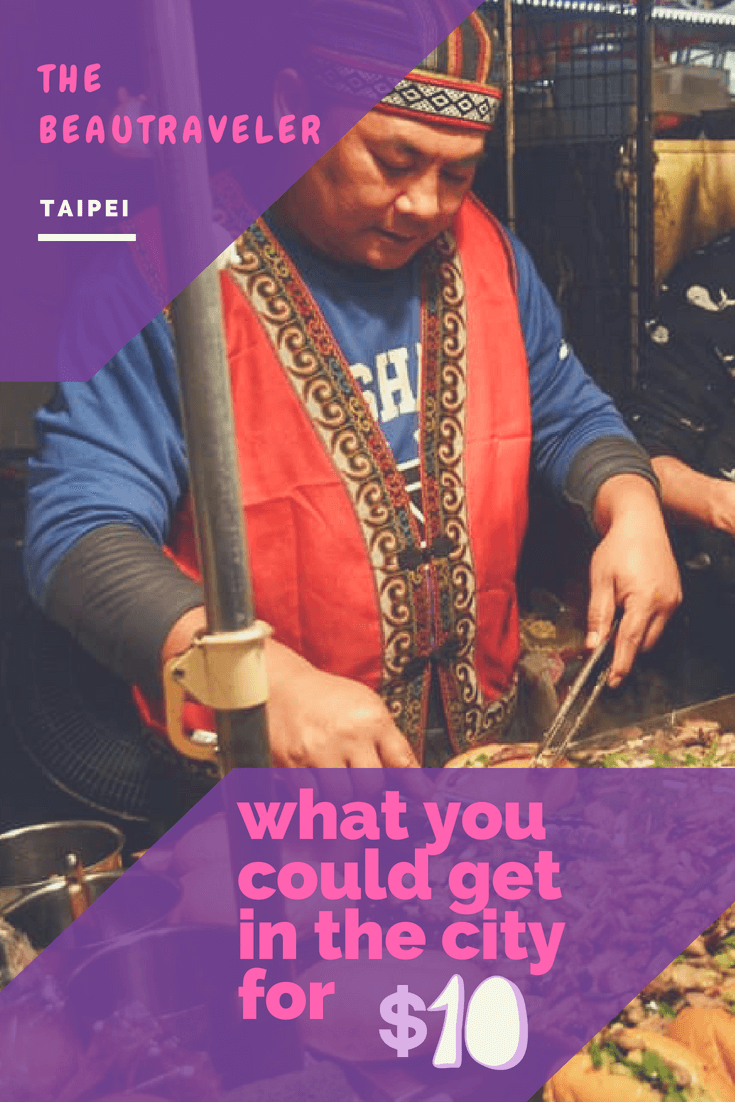 The Mixture of Chinese, Japanese, and Western Delicacy

Taipei is huge Asian capital with a mixed flavor of Japan and China melt together. Although the majority of its population is ethnically Chinese, the almost 70 years of severance from the mainland, and the heritage left by the Japanese colonization make it a unique city.

Even though I think the downtown area is more interesting to live in than to visit as a tourist, still Taipei doesn’t lack in things to do, especially if you haven’t visited China or Japan, you’ll find this city very interesting.

Beside that, Taipei has a very good transportation network that allows the travelers (and the locals as well, of course) to reach with ease and quickness all the highlights around the city, and they are many! Taipei is the logical base from where to start your itinerary around Taiwan.

Taipei is not as cheap as Chinese cities, but not expensive either, for sure the best way to spend 10 bucks is to taste the extremely variegate choice of street food, a fusion between Chinese, Japanese, and Western cuisine.

Taipei is indeed famous for its night markets, among the many in the downtown area my absolute favorite is for sure the Shilin Night Market. To get here just take the subway and get down at Shilin Station.

The market opens at dusk and is pretty big, here you can taste seafood ($2 USD for a portion of claims, $2 USD for fish rolls, $1 USD for 1 oyster), sausages, cheap noodle soups, tropical fruit drinks, a typically roasted pork, weird baby octopus covered in melted cheese, and much more. If you are willing to spend 10 bucks here, no doubt you’ll get back to your hotel with a full belly.

If you still have some bucks to spare, you could hop again on the subway and head to Beitou hot spring area. Here are most of the hot spring resorts Taipei is famous for, but not every tourist knows that there is actually a public hot spring facility where you can access for about 3USD. These open-air hot springs have six pools with different water temperatures, the quality of the waters is very sulfuric and has great effects on your skin, moreover is a great way to glimpse into the local life.

What else may you ask for only 10 bucks?

Contributor: Daniele and Elena from Cycloscope

Cycloscope is a project by Daniele Giannotta (born in 1982 who is a musicologist, cultural worker, and sound artist) and Elena Stefanin (born in 1984 and graduated in Culture and Human Rights studies). Their project is to explore the world respectfully by bicycle for documentary purposes. Their blog is a series of reportages about contradictions and conflicts, traditions and cultural evolution, natural wonders and environmental risks of a quickly changing world.