Just this afternoon, I got a message on Messenger from one of my classmates in high school asking for my Whatsapp number.

As salty as it sounds, if I could go back to the time when I was in high school, I wouldn’t. I hate the people at my high school. And I can’t even remember the time when I actually had a good time or even met a genuine person around that time.

If there’s anything that I know about this person that dropped me a message on Messenger, it’s the fact that I really don’t want to bother to get in touch with him. So I ignored his message, pretending that I never noticed its existence.

Other time, one of my former colleague at work called me. Not sure what he wanted, but I didn’t pick up the phone either. I mean, if it’s really urgent, he could drop me a message. But I’m not really in the mood to talk to him or even meet him. So I ignored that too. 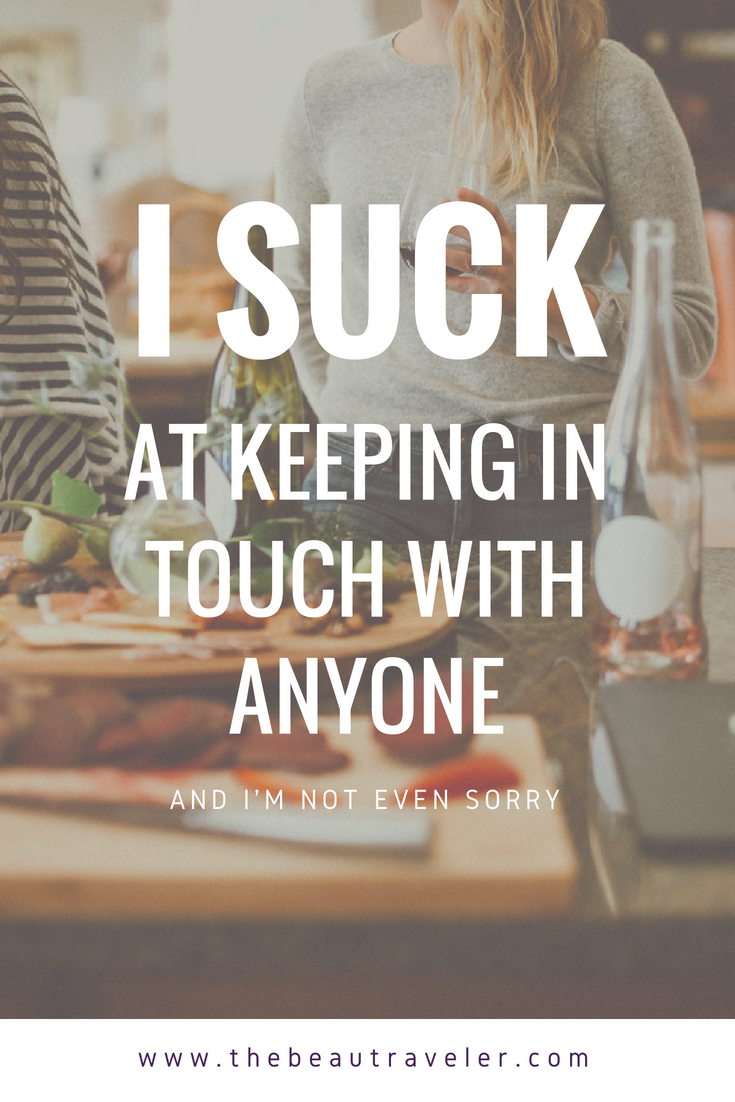 Since a few months ago, I got a problem with my iPhone, and most of my friends know the number. And instead of reactivating the number, I decided to leave it and wait until I could actually buy a new phone. So far, I’m using my business phone for work so that I could isolate myself with work and those people who actually matter in my life.

I mean, if they really matter to me, obviously they’ve got both of my numbers. So they still could get in touch with me if necessary despite my iPhone got dysfunctional.

But then again, this time I’m not gonna talk about how I broke my iPhone. Instead, I’m going to share with you why not keeping in touch with some people actually does me some favor. In fact, I just went out with some friends a few days ago and I could actually tell them in confidence that I’m in the happiest state of mind.

There’s a term in my mother tongue for being an ‘old maid’, that women in 30++ who are still single usually have a bad attitude. Mostly, it’s because most people in the community around here are prude and they think that just because one is not married, then one never has sex.

I’m getting closer to the age 30 and not married, I might be considered as an old maid now, but in my defense, I think it has nothing to do with sex. It’s more into, the older I get, the less bullshit I want to take. Therefore, I wouldn’t bother to keep in touch with some people. And I think that’s alright.

Some people think it’s important to know who’s getting married to who, or whose baby is due. I don’t think it matters, I only want the best for them for whatever happens to them. It’s just I don’t think I have to keep up with everything.

Reunion is Not Really My Thing

I just got trapped into this alumni committee, and frankly, I don’t feel like I belong there despite we share the same alma mater.

Those people keep talking about who’s working where. This person A is now the managing director of Bank ABC. Or that guy D is now active in some important cause.

I always know my ego is actually my biggest problem, it really depends on how you see it whether it’s a good thing or otherwise.

For me, I think it’s important to love myself the way I am despite how society thinks I need to be. And in the last reunion, when they asked me what I’m doing now, instead of supporting the things that I finally could make me feel content, instead they’re trying to give me some lecture. From having a settled career to even start thinking about marriage.

These were the toxic people that I had to deal with in the past, and why do I bother to keep in touch? I certainly don’t fancy the idea of keeping in touch just to make me feel bad about myself.

The thing about getting back in touch with whom you haven’t spoken for so long is that I’m glad that I’m quite both cynical and overthinking.

When someone who never really got you seriously during college, and suddenly they slided into your DM, you’d start wondering what was behind their motives. And based on my personal experiences, I know they didn’t message me to just find out how I actually was.

Some of them sent me a message because of some standard cause like they are aiming a position in the company that I (used to) work for. The worst thing that happened to me is those people who are into MLM and trying to engage with me so I could be their downline.

It’s like, you never took a second glance when I was around, and now you need me, I’m suddenly important? No, thank you.

Those Who Matter to You Will Find A Way, and You’ll Definitely Reciprocate Because the Feeling is Mutual

In my case, those who matter to me know both of my numbers so they can reach out to me anytime. And as shitty as I am as a friend, I will respond to their text because my heartless ass cares about them. And honestly, those people are the kind of people who would actually contact my sister when they couldn’t hear anything from me so yeah…

Most of my best friends know that I’m the kind of person who would value solitude more than anything. They know that most of the time, I prefer to be left alone. And for anything that matters, they know how to reach me: texting me.

Why? Because despite the fact that I rarely respond to it, I always read every message that comes to my inbox. Just a heads up, if you ever get your message ignored, then maybe it’s not me, it’s just that I didn’t find your message was worth to respond. 😛

So yeah, despite maybe some people think I’m arrogant just because I don’t want to keep in touch, just know that I give less fuck than 10 years ago. And I do it for my own good. I’m old enough to think that it’s time for me to please myself rather than just to make everybody happy when really it’s not worth it.

And yes, I suck at keeping in touch. But then again, I’m not even sorry!