By the time I arrived in Hue, I couldn’t decide whether I would stop in Hoi An or just go straight to Ho Chi Minh City as I chose to cancel my booking at this homestay in Hoi An. For some reason, I got trapped into this situation of being both indecisive and spontaneous traveler at the same time when I got to Hue.

I mean, I only got 2 weeks in Vietnam, and I felt like I wanted to see everything all at one. At some point, I just wish I could stay at least a month in Vietnam.

Anyway, I was lucky that I stayed at Sunny Fine Guesthouse and I had Toan to consult in order to seek the second opinion to consider. As I spoke to Toan, he suggested me to join DMZ Tour and still go to Hoi An instead of going to Ho Chi Minh City.

I was hesitant to go to Hoi An as I wanted to go to Chu Chi Tunnel, which could take the whole day from HCMC. And according to Toan, DMZ tour is highly recommended as I would be able to see tunnels too. And even more sentimental as I will be able to see the border between North and South Vietnam which was once established to divide both areas during the war.

You see, I’m the kind of traveler who always gets emotional when it comes to sentimental stuff. Like I could freak out just by the idea of being in two places at the same time. So just like that, my doubt disappeared and I decided to go for DMZ tour! 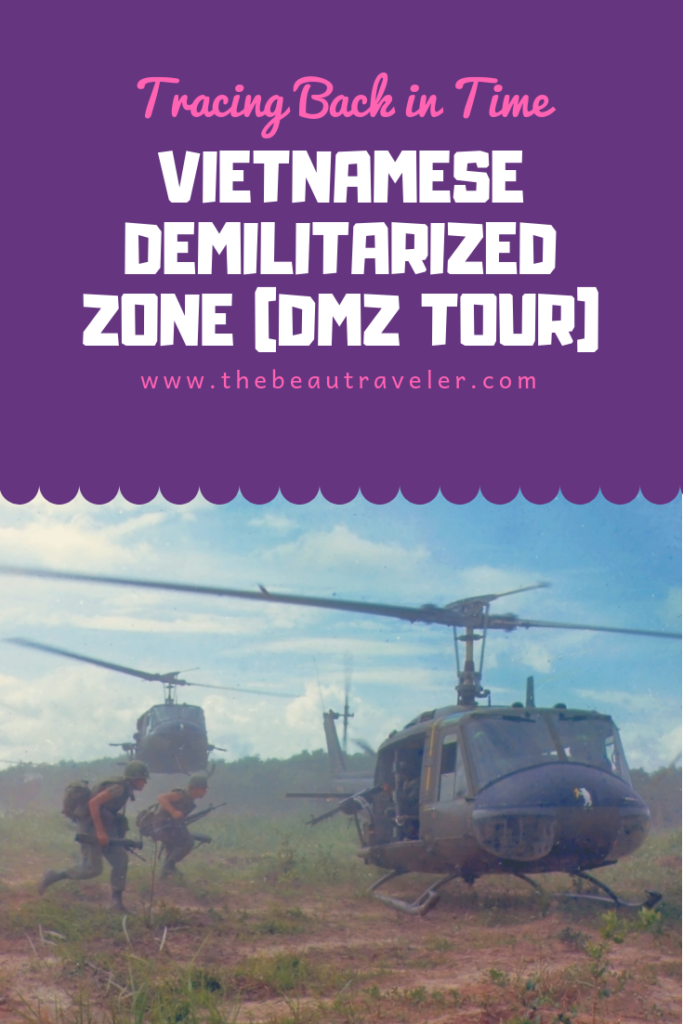 I could get the ticket for VND 380,000 (around USD 17) through Sunny Fine Guesthouse as Toan told me to get ready at 7.30 AM the next day as the bus would pick me up at the guesthouse around that time.

The bus arrived at around 8 AM and after picking up some other people, we were heading to Dong Ha to pick up the tour guide. There were 8 of us in the tour, 9 with the tour guide. Whom I forgot the name. So sorry! 🙁

So it took us around an hour to get to Dong Ha from the city center of Hue and after picking up the tour guide, we went straight to Khe Sanh Marine Base to see something that was once important and strategic. The Rockpile.

Honestly, it was so hard to look impressed while we stopped by around the Rockpile. I mean, sure it was an important post during Vietnam war. But to be frank, I could see nothing but just a big rock.

However, when I asked the guide whether we could reach the top of the rock, she mentioned that it would be difficult that in order to get there, we might as well take a helicopter. Now that I think about it, I’m not really sure whether the guide was just being sarcastic. Hmmm.

Our next stop after the Rockpile was Ho Chi Minh Trail, in which it has now become Ho Chi Minh Highway.

It took only around 15 minutes for us to stop by and take a look around the once-trail as we had to continue our trip to the former site of US base that has now become a museum at Khe Sanh.

The weather was a bit cold as I went there during the winter. The weather was not really a problem though because apparently, the biggest problem about this area is the mist.

Yes, it was so misty to the point we barely could see anything in front of our car on the way to the museum.

The tour guide also explained that the military personnel back in the day during the war also encountered the same thing, and it was even more difficult for them to see their comrade/enemy when it gets worse.

The museum itself displays a lot of stuff from during the war, from helicopter to even cigarette pack that once belong to a military personnel based in there.

After the museum, we got back to Dong Ha to have lunch. The lunch was excluded, and I had this spring roll for VND 50,000 (around USD 2). It was an okay spring roll. Not so special, could’ve even skipped it for the better ones to be honest. Hmm.

Once finished our lunch, we then continued our tour to the Vinh Moc tunnel. On the way there, we passed the infamous Ben Hai River that was once the border divided the North from South Vietnam, and vice versa.

Nowadays, it’s just a river. But instead of disappointing like the Rockpile, at least the river still has something sentimental about it.

Yup, the blue and yellow color are used to mark the South to the North. 🙂

Also, there was also this Reunification Memorial.

Okay, so actually there’s a philosophy behind this monument. Like why they used banana leaves and there’s also a meaning behind every symbol there is in the monument. Unfortunately, the tour guide has a thick Vietnamese accent that I could barely understand.

So for those of you who’ve done the tour or Vietnamese knowing your history, feel free to share what’s the philosophy behind this monument please! 🙂

Finally, our arrival to Vinh Moc Tunnel marks the peak of our DMZ tour. Vinh Moc Tunnel was used for Vietnamese people as a hiding place during the war. They had constructed the tunnel with as little as possible back in the days, in order to use it as their shelter from the bombings and all disaster outside.

It was amazing how they had done it now that I’ve seen it. I mean, they even had nursery room in the tunnel! People actually survived their lives from the war in this tunnel. They delivered babies and told their children stories in this freaking tunnel. It was impressive!

People actually survived their lives from the war in this tunnel. They delivered babies and told their children stories in this freaking tunnel. It was impressive!

Okay, a silly thing happened when we were inside the tunnel as there were some statues in some areas to show what people did during the war.

Since it was quite dark inside the tunnel, you couldn’t pretty much tell a statue from a real person. And then in this area, there was this thing that I thought a statue started moving and I was screaming. 101 being a solo beautiful traveler.

As it turned out, this guy got tired walking through the tunnel and decided to take some rest sitting among the statues. And by doing that, he almost got me a heart attack. Hahaha.

By the time we came out of the tunnel, who would have thought that the tunnel is located by the seaside?

Through visiting the sites, I could imagine how devastating it was living during the war. People lost their home in order to live in the tunnel for their shelter. They tried to survive, continue to live in this tunnel with not so many things they have to build this tunnel.

I was impressed with their determination, as well as their engineering skill. Without both combined, I don’t think it would become an object to tell like today.

Although the tunnel was pretty much like our main destination in the tour, it wasn’t the last site that we visited as our next stop was a cemetery where the soldiers who died during the war buried. It was nothing fancy like Taukkyan War Cemetery, but we could tell that it was not jus a regular cemetery.

By visiting the cemetery though, I wonder what’s with us South East Asian people and war cemetery like this and Taukkyan. If people had their date in Taukkyan, the children actually used the cemetery hall to play football. It was a bit disturbing, but anyway…

The tour itself ended at around 4 PM, so we got back to Hue at around 5 PM. It was rather a pleasant tour, I suppose. I’m sure for those who like history like I am, you will enjoy the tour as much as I enjoyed it.

For me personally, I didn’t really follow the story of Vietnam War so I missed some things here and there during the tour as I wasn’t sure what really happened during the war. But instead of making it demotivates me to enjoy the tour, I used my not-knowing attitude to motivate me to read more about Vietnam War.

So as Toan told me when I asked his opinion: if you love history, then this tour is for you! 😉